Matthew Gould, a crypto bull and CEO of Unstoppable Domains, predicted that the stablecoin market would hit one trillion dollars market price by 2025. Likewise, he believes that Bitcoin may not hit its all-time high price anytime soon. He posited that Bitcoin’s price of $64,000 might happen again after a year or two-year run. 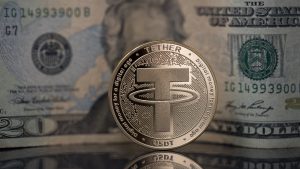 However, he’s optimistic about the growth of the stablecoin market due to the approach some companies are using to peg stablecoins as digital assets equivalent to some currencies or valuables. One of such companies is Circle that issues USDC as its stablecoin. Meanwhile, Gould is working to enhance users’ experience on his crypto platform via Gould’s partnership with Circle.

How Stablecoin is Growing Since Inception

Gould claimed that the milestone might be achieved faster than the predicted time. He believes that this may happen if the market continues to recover while creating more decentralized finance platforms. This explains that when more people engage in the stablecoin markets, more people will participate in the decentralized platforms.

However, Tether (USDT) is prone to financial risks because of the irregular exponential growth USDT experiences based on the market. Likewise, other stablecoins feel the impact of these potential risks because Tether is a part of their drivers.

Gould said, “Whenever you have that kind of growth, you’re gonna have risk. But with increased competition in the marketplace, together with greater regulatory clarity, that risk will subside, as products become safer for consumers.”

This statement explains the fear coin holders may have when they are unsure of the coin potential. However, clear regulatory call and demand for other coins within the market will make the market stable with little or no financial risks.

The market approach and government compliance exhibited by groups such as Circle regarding their USDC make the stablecoin market conservative and a safe place to invest one’s money. His concern over some different coins with their specific risks made him establish that their marketing should have come differently.

While people follow him and other experts closely, he expresses his opinion about the bank equivalence of the amount you hold. However, he wants others to voice their opinion about the subject. He said, “You shouldn’t be able to call yourself a $1 coin if you don’t actually have $1 in the bank.”

The regulatory exertion from the regulatory bodies should not stop or slow the growth of this innovation. This will bring optimism to the consumer, and they will operate more in the private stablecoin market. He believes that the slow development of public projects will make the stablecoin market snowball despite different government doing their best to institutionalize their central bank digital coin.

The retracement of Bitcoin to hit $64,000 meets lots of skepticism, but Gould stated that the long-run event would give good retracement to Bitcoin and other cryptocurrencies. But his conviction stemming from market experience made him proclaim that it will take Bitcoin a minimum of one year to get to its all-time high price again.

Based on market experience, he believes that a market crash of fifty percent or more will make the coin undergo a one-year run before it can retrace to its high price again.

Possible Outlook of the Crypto Market

Stablecoins’ and cryptocurrency’s volatility call for regulation by different governments across the world. That is because the volatility impacts each national economy and may cause massive damage to the economic stability of some countries. However, some governments are taking calculated measures to regulate cryptocurrency.

From market research, stablecoin and crypto market recovery will happen over time because Bitcoin’s fifty percent crash caused severe damage to the market capacity to hold well. As such, consolidation can occur in a year or two. Generally, there is optimism in the market space because of the recovery happening lately.

Gould closed his statement with a comment about various governments’ moves regarding crypto regulation. He was specific about the government’s efforts to establish regulatory measures to keep digital currencies in check and make them accountable.

This arose from the growing concerns over the performance of stablecoins in the crypto market despite the Bitcoin crash. They believe that exponential growth from one billion dollars market value to one hundred billion dollars market value in 2019 is suspicious. As a result, they are moving in with strict regulations for digital assets and stablecoins that represent fiat currencies.

What is Decentralized USD (DUSD)?

Decentralized USD (DUSD) is a stablecoin for the decentralized finance protocol DeFiChain. It is a type of cryptocurrency that is pegged to

What is Compound USD Coin (CUSDC)?

Venus USDT (vUSDT) is a cryptocurrency that operates on the Binance Smart Chain. The Venus Protocol is a decentralized money market built