A senior strategist at Bloomberg, McGlone, believes that Bitcoin may retrace its bullish run after presenting a chart analysis. The shared chart compared the current Bitcoin market position with a similar market event that had occurred during the 2018/2019 trading period. Based on his previous bullish call, he is convinced that Bitcoin’s price may spike again after overcoming the resistance of around $60,000.

The bearish and bullish rides of Bitcoin stagger based on the performance of the three critical Moving Average indicators on the chart. These indicators determine possible turnouts of Bitcoin prices during chart analysis.

These three moving indicators are:

The resistance and support levels of Bitcoin are shown below, with the three indicators. Moving Averages are one of the most common FOREX, stock, and crypto market indicators. Therefore, they are the core of market performance analysis, and no trading experts will ignore them while mapping charts. 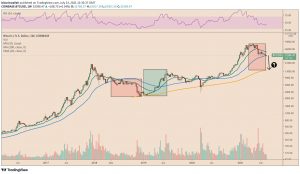 Whenever it’s a bull season, Bitcoin’s price stays relatively above the three moving averages. However, when Bitcoin is in a bearish state, the cryptocurrency’s value is nearing (if not entirely below) the 20- and 50-week exponential moving average.

Meanwhile, the 200-week simple moving average (SMA) is considered in the trading world to be the last line of protection against an all-out collapse. As per the chart above, Bitcoin has remained relatively above 200-week MA. Once Bitcoin was to hit the 200-week MA, Bitcoin would be on the offensive, with the price flying well above the moving average.

A similar case occurred around March 2020 due to the COVID-19 pandemic crashing the entire market. The orange wave supported Bitcoin’s price to hit over $65,000 from approximately $4,000 price.

This year’s drop made it the third drop Bitcoin will experience since 2018. Bitcoin’s price has cut below the 20-week SMA trendline while tending towards the 50-week SMA for support. This makes the price move from $39,000 to around $32,000. However, repeating this old pattern will make Bitcoin’s price fall around $14,000 as it moves towards the 200-week SMA.

Although McGlone—Bloomberg’s Strategist—is convinced that Bitcoin retracement may happen sooner than expected. He blames the recent Chinese ban on crypto as a factor for the downward trend.

Tether Enjoys the Ride and Takes the Glory

A recent turnaround in the crypto space around May has forced cryptocurrency miners to stop their operations or move outside of China. China banned cryptocurrency mining and exchanges across the federation. As a result, Bitcoin prices experienced a nosedive.

Despite that, McGlone claimed that the Chinese ban opened the way for a significant acceptance of the tokenized US Dollars across their economic activities. And that resulted in an increased demand for Tether (USDT).

He then went ahead to show how the demand for USDT continuously affects the Yuan to Dollar exchange rates in the forex economy. As a result, Yuan keeps losing its value to the dollar’s capacity. But a recent development revealed that Yuan is regaining strength against the dollar. But this growth is short-lived by the increasing market cap of USDT that rose by 40%. McGlone mentioned that,

“China’s rejection of open-source software crypto-assets may mark a plateau in the country’s economic ascent. We believe while extolling the value of the U.S. dollar and Bitcoin.”

Petr claimed that the dollar would keep rising ahead of the Chinese Yuan in the digital space because the digital dollar is acting equivalent to the US dollar. Then, he mentioned that Bitcoin should retrace to $50,000 before the year runs out based on the existing institutional fear of missing out.

Will the Crypto Ban Affect the Chinese Economy?

Another prominent claim by Yuriy Mazur (Head Data Analytics, CEX.IO Broker) counteracted McGlone’s claim. The declaration went on to dispute that the Chinese economy will be healthy regardless of cryptocurrency’s existence.

He proclaimed that the demand for a digital asset has little or no effects on the Chinese economy. Likewise, he sent a warning note to the cryptocurrency community to expect the Chinese government to apply considerable measures while making their Yuan-backed cryptocurrency public.

Despite the Chinese cryptocurrency ban causing some damage to the crypto market, optimism exists that Bitcoin will retrace its bullish trend and be profitable again. Likewise, alternative coins will follow the retracement pattern and perform well.

Meanwhile, the world should not expect the Chinese to back down on their ban because they will establish measures that will support the strength of the Yuan digital coin and make it sustainable for its holders.

Bitcoin Enters the Final Stage of the Major Bull Trend

Bitcoin (BTC), the largest cryptocurrency by capitalization, has unlocked another milestone after breaching past its initial market cap all-time high (ATH) of