On September 7th, 2021, El Salvador passed the Bitcoin Law and became the first country to announce Bitcoin as a legal tender. This significant announcement shook the financial world while there were celebrations in the crypto space. El Salvador’s president tweeted earlier that day that,

After three months of parliamentary pursuit, El Salvador passed the Bitcoin Law. It is a historical event in the crypto space and the financial markets at large. This makes the Central American nation become the first country to make Bitcoin a legal tender. However, El Salvador’s Bitcoin adoption experienced technical glitches due to a massive attempt to access the Chivo Wallet app launched after the announcement.

While this adoption meets mixed excitement and hostility from different parts and outside of the country, the Central American region is optimistic to see a reduced remittance cost for this global experiment. This allows financial inclusion from every citizen regardless of age or race.

Meanwhile, the Central American Bank for Economic Integration (CABEI) provides El Salvador adequate support to establish the global money-laundering policy despite Bitcoin adoption. However, there are different warnings that this adoption may plunge El Salvador’s economy.

Regardless of the certainties surrounding El Salvador’s Bitcoin adoption, Charles Hoskinson—Cardano Founder—believes that different countries will critically look into El Salvador’s experiment and make a case of adoption from it.

He is optimistic about every nation having a regulatory policy for crypto adoption because it is a technology they can’t fight anymore. In Charles’ YouTube video, he expressed his gratitude to the community support that the crypto space has enjoyed over the past 12 years. He believes this will change the perception of individuals around age 25 about wealth creation and how they can pass it on to their kids.

He went on to mention that there is no fight against the legitimacy of Bitcoin any longer. Instead, nations will now seek ways and create policies around crypto adoption due to El Salvador’s Bitcoin adoption.

Despite the ongoing celebration occurring in the crypto space, an expert—Jurrien Timmer of Fidelity Investments—is convinced that Bitcoin’s importance is a bit exaggerated. In Jurrien’s interview with CNBC, he reminded the public that El Salvador hadn’t dropped the U.S. dollar as its official currency.

He mentioned that Bitcoin adoption is voluntary, and individuals can decide to pay using the dollar currency or Bitcoin for such transactions. Although this may be voluntary for citizens, local store owners are directed to accept Bitcoin as a payment option.

Timmer mentioned that this is the first test of exchange medium Bitcoin will undergo. And this may be affected by its scarcity and the proof-of-work mining approach that Bitcoin miners utilize. This makes it less scalable compared to coins like Ethereum. He said,

“Bitcoin is trying to go from being asset class to being a currency or big money.”

After the announcement of Bitcoin adoption, Chivo Wallet launched on major application stores across devices. El Salvador’s Bitcoin adoption process experienced the first roadblock due to massive users trying to access the application simultaneously. Due to this, the Salvadoran President announced a maintenance period via his Twitter page. He published a tweet reading,

“We will disconnect the system from 1 am to 6 am to make these adjustments. Our teams are ready. We hope tomorrow is much better.”

Meanwhile, he encouraged citizens to report any technical issues related to the wallet. He claimed this would enable them to address the problems and provide users with a fantastic app experience.

Merchants Can Be Sanctioned for Rejecting Bitcoin Payment

As much as this new national development is critical, it is vital that the government factor in the local merchants. That is because they are actively involved in the adequate circulation of money across the nation. Amidst Bitcoin adoption as a national currency, local merchants are mandated to accept Bitcoin as a payment option.

However, there are two options involved in this scenario, and they must have an e-wallet to receive BTC. A government official, Javier Arguet—legal counsel to El Salvador’s Presidential House, mentioned that they can receive it as Bitcoin or U.S. Dollar equivalent for such transactions despite being mandatory for businesses to accept Bitcoin.

This official made it clear that the refusal of a business to accept Bitcoin violates the local regulations. Although no rules officially state that businesses will be charged with infractions of the Customer Protection Law if they reject Bitcoin for transactional purposes.

El Salvador’s Bitcoin adoption as a legal tender opens up a novel payment option for its citizen. As such, local merchants are now mandated to accept Bitcoin payments. This makes it easy for individuals to work into a store, get their favorites and pay using Bitcoin instead of the U.S. dollar.

In a bid to prove its capacity, a journalist—Aaron van Wirdum—patronized McDonald’s restaurant in El Salvador to clarify the claim that merchants now accept Bitcoin payment. After being redirected to pay via the Lightning Network invoice page, he expressed his surprise after scanning the QR code printed for him.

“Just walked into a McDonald’s in San Salvador to see if I could pay for my breakfast with bitcoin, tbh fully expecting to be told no.

But low and behold, they printed a ticket with QR that took me to a webpage with a Lightning invoice, and now I’m enjoying my desayuno traditional!” 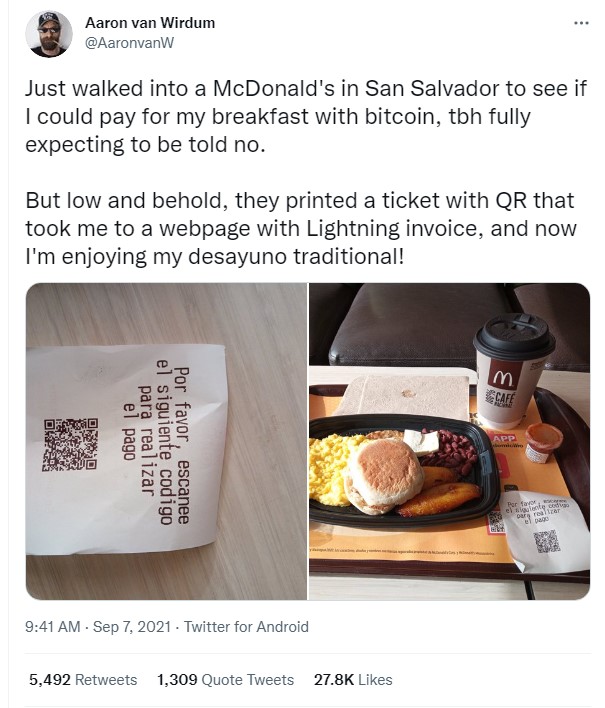 What is Yearn.Finance (YFI)?

Yearn.Finance is a collection of protocols that are being run via the Ethereum blockchain which allows participants on the platform to optimize

What is Zcash (ZEC)?

Zcash is a DeFi cryptocurrency platform that is focused on the delivery of anonymity and privacy for transactions. This is made possible

What is Tezos (XTZ)?

Tezos is a Blockchain-based network that supports the creation of smart contracts. In many ways, the Tezos network is similar to the